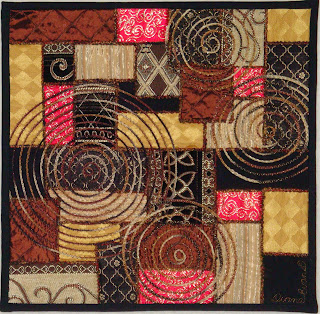 A few years ago, I took a workshop from quilt artist Carol Taylor and learned her techniques for appliquéd patchwork and perfectly couched spirals. She calls the class “Arc-i-Textures” because of the circular nature of the quilting and the variety of elegant fabrics, nubby yarns, and shimmering ribbons used to create it. During the workshop, Carol warned us that making these small wall quilts could become addictive, and she was right: I’ve made over a dozen of them, and, each time I finish one, my mind starts putting together new color combinations for the next one.

I use the word “Cycles” to refer to my own interpretations of this technique, and each one has its own title. The piece pictured above is called “Embers,” and the client who will be receiving it, interior designer Sharon Einbinder of Windows, Walls, and More, chose the colors. It’s inspired me to start another one soon – I guess these little quilts really are like pistachio nuts: you can’t stop at one -- or a dozen.

Thank you for reading and commenting on my blog – I hope your week is filled with inspiration.

A Day To Dye For! 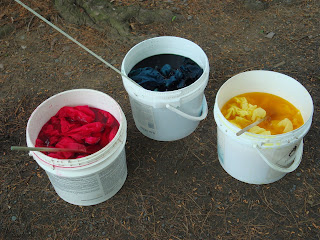 Here's a recipe for a perfect day:
1)  Start with:  6 friends and fellow fiber artists
2)  Add:  several yummy colors of Procion MX dyes
3)  Stir in:   2 dozen (or more) yards of PFD fabric
4)  Sprinkle liberally with imagination and spontaneous creativity
5)  Bring everything together in the lush, serene acreage surrounding Pat Spillane's home
The result?  Yards and yards of colorful fabric and a whole lotta fun (laughter is a natural by-product of the process). 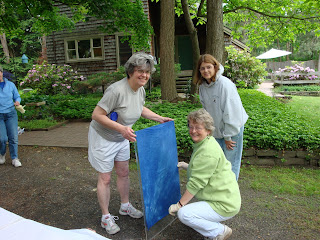 Pat Spillane (read her blog here), Kris Gregson Moss (check out her website), and Patti Turi (an expert with her camera) 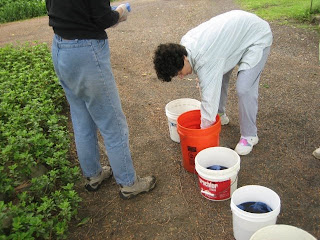 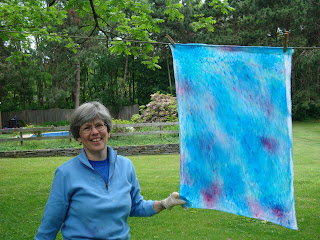 Karen Sturtevant and one of her creations
We measured and poured, dipped and stirred, sprayed and drizzled; we congratulated ourselves on our successes and learned from our goofs.  And we laughed -- a lot. 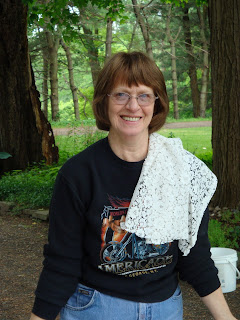 Barbara Vanselow (she offers amazing hand-made dolls on her website) 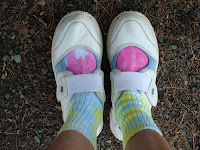 I wore my hand-dyed socks (a gift from a friend) just for the occasion. 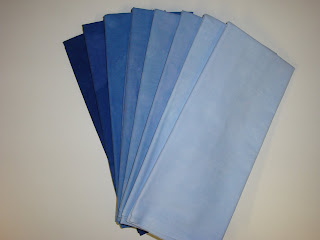 Here are my results from immersion dyeing a gradation of blues (they were supposed to be shades of periwinkle, but I learned that fuchsia is not a very stable dye color and washes out very easily).
So I have a question for any of my readers who have done some dyeing of their own: I used 2 tablespoons of Cobalt Blue and 3/4 teaspoon of Fuchsia.  What combination should I use to get that nice shade of blue-violet?
Posted by Diane J. Evans at 7:09 PM 4 comments: 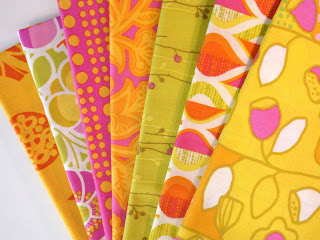 I am absolutely thrilled!  I won the latest giveaway from Terri Cohen's blog, Quilternity's Place, and just look at the prize: Seven (count 'em!) half-yard cuts of the most luscious fabrics I've ever seen!  And they're even more beautiful in person.  Thank you for offering such a generous gift, Terri -- I was so excited when I found out I'd won that my fingers wouldn't type my thank-you note!  If you haven't discovered Terri's blog, you must visit it -- she also runs an on-line fabric shop titled From Here To Quilternity, and both the blog and the web site are feasts for the eyes.  And be sure to look up her posts on knitting chevron scarves -- I am now officially hooked, and it's hard to put the needles down.
So now, dear readers, I invite your input -- I have so many ideas of what I would like to create with these magnificent fabrics and I can't decide.  They're such eye candy that I'm reluctant to cut into them -- right now, I have them displayed on my table like precious jewels.  What would you create??
Posted by Diane J. Evans at 9:48 PM 2 comments:

The Creative Process: The Search For Fabric

(This is Part III is a series of . . . well, I'm not sure how long this will last, but I hope the end is in sight . . . Please see my posts from 4/24 and 5/24 for the first two parts.)
Choosing the fabrics that will work best in the design is often the most agonizing part of the process for me, most likely because, to borrow a phrase from South African quilt artist Rosalie Dace, I'm very "mingy" with my fabric (a blended word derived from "miserly" and "stingy" -- says it all, doesn't it?), and I hate to recut a shape.  Somehow, I'm able to move myself through the "sturm und drang" of the decision making, and it helps to cut out one or two pieces at a time and audition them on the design wall. 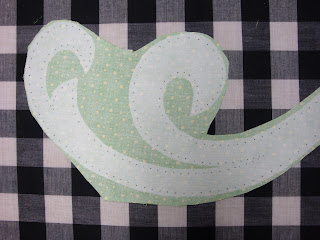 The interfacing is ironed to the fabric. 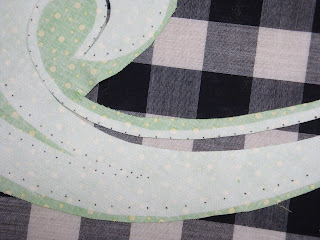 The motif is cut out just inside the dotted line.
All the interfaced motifs are pinned in place on the design wall, and I let them simmer there for a few days.  I check on them periodically and make changes until I'm as pleased as my obsessive nature will allow me to be. 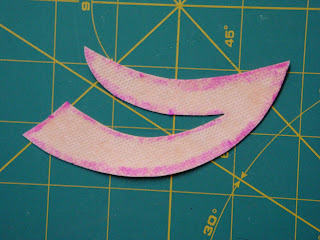 When I'm finally ready to sew, everything comes off the wall.  Starting with the center area of the background and working from the bottom layer upwards, I glue one shape at a time to the background by applying a thin line of UHU Purple Glue Stick around the perimeter of the motif and putting the piece in place. 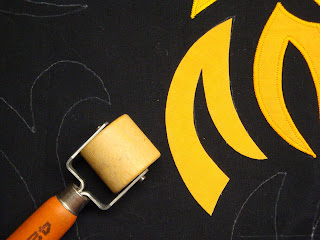 A wallpaper seam roller is used to press the glue into submission without distorting the piece.  It's ready to be appliquéd.
More to come in Part IV.  In the meantime, be sure to check out Marilyn Rock's blog for her latest giveaway -- another beautiful collage is awaiting a new home.
Posted by Diane J. Evans at 12:51 PM 2 comments:

SPOILER ALERT!!
This blog post contains nothing about art quilting!  It is simply a vehicle for me to share my latest adventure with all of you, one which left me giddy with delight.
Our son, Sean, is a columnist with the New York Daily News, and my Mother's Day gift this year was a two-day visit to the city, where I had the opportunity to watch him at work (interviewing celebrities) and to meet some of New York's glitterati at the same time.  On Thursday evening, we attended a cocktail party at the apartment of actress Stephanie March (from "Law and Order: SVU"), where model/actress Brooke Shields was the guest of honor.  (I can't believe I'm actually writing this!!) 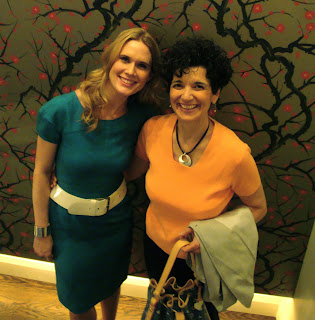 Stephanie March (and me, grinning wildly)
On Friday, Sean took me as his guest (poor kid) to the Drama League Awards Luncheon at the Marriott Marquis Hotel, where Sir Elton John received the award for Distinguished Achievement in Musical Theatre.  When Sean introduced me as his mother, I believe Sir Elton said, "Your mum?  How lovely!" and kissed me on both cheeks (I do remember having the presence of mind to address him as "Sir Elton," but what I may have said after that is a bit of a blur, because I was relatively speechless). 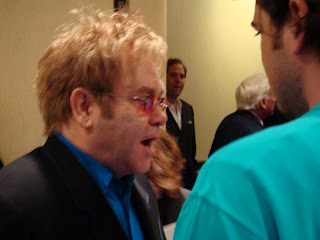 Sir Elton John and Sean
There were so many wonderful actors and actresses there that I found myself spinning my head from one direction to another, much like a kid in a candy store. 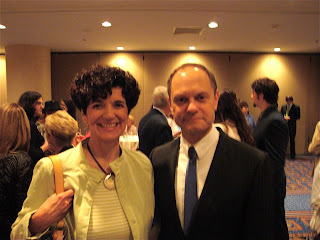 Here's David Hyde Pierce (from "Frasier") and me,
grinning wildly . . . 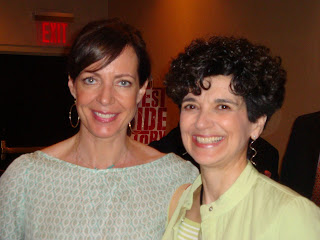 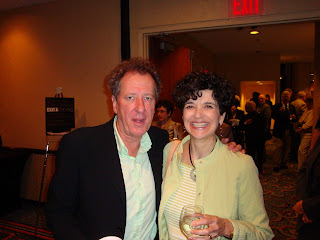 . . . and here's Geoffrey Rush (from "Pirates of the Caribbean") -- and me, grinning wi . . . . well, you get the idea.
I shook hands with John Lithgow and told Marcia Gay Harden how much I admired her work (and her dress, which was absolutely gorgeous) and floated through the event in a star-struck haze (and grinning wildly).  I never imagined that I would ever know anyone in my life who interviewed  the rich and famous for a living, let alone that I'd be related to him.
It had to be the best Mother's Day present ever -- thank you, Sean.
And thanks to all of you who read and comment on my blog, and for indulging me as I've shared my fairy tale adventure with you.  I'm always grateful.
Posted by Diane J. Evans at 10:01 PM 14 comments:

Diane J. Evans
Schenectady, NY, United States
After spending many years in a room filled with an ever-changing assortment of teenagers, I am now retired from teaching and enjoying the pursuit of my passions, the greatest of which is bringing art quilts to life. I share Danny Kaye's philosophy that "the world is a great big canvas -- and you should throw all the paint you can on it." Music and mathematics are my muses, and I strive to create quilts that reflect my love affair with color.

My Fifteen Minutes of Fame 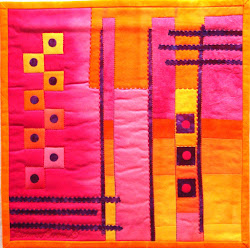 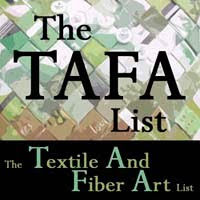 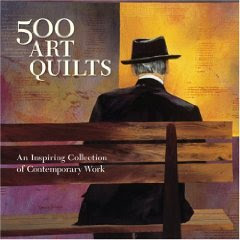 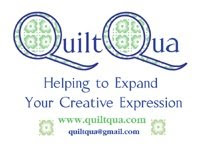